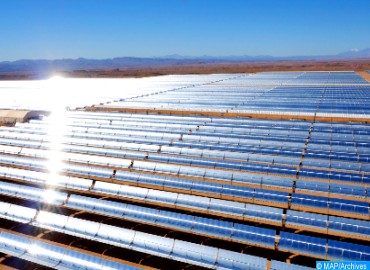 In its “North Africa’s pathways to clean energy transitions” report, the agency underlines that “important lessons can also be drawn from Morocco, which alone accounted for three-quarters of the region’s renewable electricity production growth.”

In Morocco, “impressive achievements in the energy transitions process have been underpinned by concerted government policy,” the agency notes, adding that in 2009, the Kingdom announced a 52% renewables target of electricity supply by 2030, which it now expects to reach five years early.

In fact, the country is now on track to increase the share of renewables in electricity to 60-65% by 2030, it says.

“In addition to setting long-term targets (and enshrining the right to sustainable development in the constitution), Morocco sought to provide the legal and regulatory framework to roll out its broader transitions strategy, aiming first and foremost at market creation.”

Since then, subsequent legislation was passed that allows tendering and auctions for large-scale solar and wind projects, encouraging private investments in the sector, the report observes.

Morocco’s persistence in its strategy has been durable, and the uncertain climate in 2020 has not derailed its initiatives, with Morocco successfully commissioning two wind projects this year, the source says.

“The country is not resting on its laurels, however. It now plans to increase its renewables penetration by including this in its broader outlook of regional integration and trade. As well as ensuring priority dispatch for renewables, Morocco has developed interconnections with Spain and Algeria, and is now looking to integrate further into other markets in North and sub-Saharan Africa, as well as Europe,” the agency notes.

Renewables generation capacity grew by 80% over the past ten years, and almost by 560%, when excluding hydropower, the agency points out, adding that this progress has come despite significant recent social and political change in four countries in the region.

As technologies have matured and costs have dropped, countries have increasingly been designing distinctive policies to promote energy transitions.

On September 21st, the International Energy Agency launched “the Clean Energy Transitions in North Africa” report. The release of this new publication provided an opportunity for stakeholders and experts from across the region to take stock of the situation today and share experiences on how to spur future development during a virtual dialogue convened by the IEA.

Trusted by some of the biggest brands

We’re Waiting To Help You

Get in touch with us today and let’s start transforming your business from the ground up.